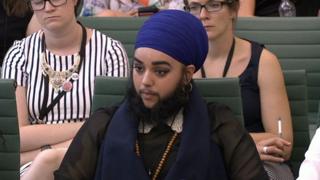 One told Parliament’s annual Youth Select Committee that “so many” young people were suffering from online abuse and feelings of inadequacy.

There should also be greater diversity in the media, the committee heard.

The Youth Select Committee, which comprises 11 members aged 13 to 18, chose the topic of body image to consider after nearly one million people voted it as one of the top 10 issues in the UK Youth Parliament’s “make your mark” ballot in 2016.

Danny Bowman, who once claimed to be the “world’s first selfie addict”, told the committee he saw “so many young people who are suffering online” from being bullied or body shamed.

He said his own experiences of social media led him to have a mental health problem over his body image and to him being housebound for six months.

Mr Bowman said he thought Instagram – and the images it has of “six packs left, right and centre” – was “becoming more detrimental, especially to young men”.

He added: “I think it translates into the idea of success and failure – a lot of young men are looking at these images and feeling they are inadequate, a failure…

“If we want to solve this problem we have to go directly to social media networks.”

Harnaam Kaur, a body positivity campaigner, said there was a lack of diversity in the media.

Ms Kaur, who has claimed a Guinness world record for her beard, said this had encouraged her to set up an Instagram page.

“That is why Instagram is so important for me, to do photo shoots and show people it is ok to look different.

“The way that women’s bodies and men’s bodies that are being portrayed are not actually their natural form.”

Stephanie Teboah, a plus-size model, said a “Westernised standard of beauty” dominated the media, and called for a greater variety of ethnicities and body types.

However, she credited Instagram as a site that also hosts “body-positive” content, too, adding that users can curate their feeds to see the content they want to see.

Karim Palant, Facebook and Instagram’s UK public policy manager, told the committee Instagram was “absolutely committed” to making sure its community is “as positive as possible”.

He added that the companies wanted to make sure policies and tools were in place so that “negatives are dealt with as quickly as possible”.

The committee, which next meets on 14 July, will also hear from academics, mental health experts, education professionals, and government officials.
[ad_2]