Home Lifestyle Art In a Year of Surprises on the London Stage, Women Held Pride... 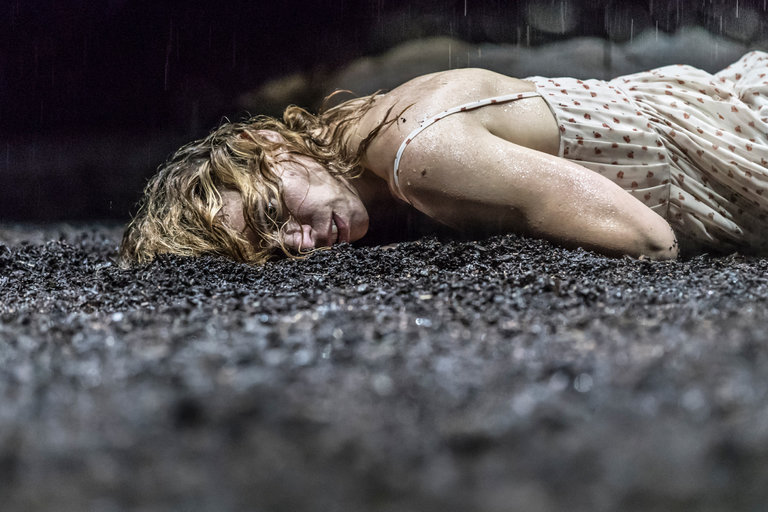 Billie Piper as Her in “Yerma” at the Young Vic.

It seems significant that one of the most heart-stopping characters on the London stage over the last 12 months went simply by “Her.” Billie Piper may have loomed especially large as this anguished, motherless character, but the luminous actress was by no means alone during a theatrical year in which women held pride of place.

Ms. Piper’s vehicle was the 1934 Federico García Lorca classic “Yerma,” refashioned for the present in a Young Vic production from the Australian writer-director Simon Stone. She played a young married Englishwoman rendered so bereft by her inability to have children that she careered toward madness. Her apple-cheeked robustness seemingly hollowed out by the final curtain, Ms. Piper vaulted in a single performance to the top ranks of distaff talent in a town where women across the spectrum of age and experience reigned supreme in 2016.

That was certainly true of Glenda Jackson, the two-time Oscar winner who, at 80, returned to the theater after a quarter-century in politics to lend a gravelly authority to the title role in King Lear, in a feisty modern-dress version directed by Deborah Warner. Striding onto the Old Vic stage like someone who meant business, Ms. Jackson’s steely-eyed monarch was at no point more affecting than in those passages of the play where the psychically battered Lear fears he might go mad — “he” being the operative word, as Ms. Jackson assumed the gender from first sight; this was no Queen Lear.

Up the road at the National Theater, a youthful and relative unknown by the name of Sophie Melville lent a lippy sense of occasion to Gary Owen’s mesmeric solo play “Iphigenia in Splott,” about a brash young Welshwoman determined to carve out her place in the world. Less feral but every bit as commanding was the great Helen McCrory as the abject Hester Collyer in the National’s revival of the 1952 Terence Rattigan play “The Deep Blue Sea,” a portrait of romantic despair of unfathomable depths.

There wasn’t a guy to be seen in the ensembles of Phyllida Lloyd’s trio of Shakespeare plays, all set in a female prison and headed by the heroic Harriet Walter, or in the quartet of older adults who gather in Caryl Churchill’s quietly cautionary “Escaped Alone” to sip tea and ponder the coming apocalypse. The productions will all open in Brooklyn early this year: the Shakespeare trilogy, with the same cast, at St. Ann’s Warehouse, and “Escaped Alone” at BAM, also with its astonishing cast — headed by Linda Bassett, a longtime interpreter of this maverick playwright — intact.

The onetime “Glee” star Amber Riley crossed the Atlantic to bring some serious vocals, and not inconsiderable acting chops, to the part of the lovesick, plus-size Effie in the long-overdue West End premiere of the 1981 Broadway musical “Dreamgirls.” Meanwhile, the producers of the year’s commercial leviathan, the hugely entertaining two-part “Harry Potter and the Cursed Child,” should be commended for thinking outside the box and choosing the Olivier award-winning black actress Noma Dumezweni to play Hermione Granger onstage. Cheers, too, to the mighty J. K. Rowling, whose tweets on the subject silenced all naysayers: “We found the best actress and she’s black. Bye bye, now,” read an especially pithy one.

Not that men were in any way denied a viewing. Ian McKellen returned to the West End in an invaluable revival of “No Man’s Land,” Harold Pinter’s 1975 play whose signature moment came in the first act, when Mr. McKellen’s shambolic poet, Spooner, recounted having once been described as “a betwixt twig peeper” — the actor savoring every syllable of a phrase that makes me smile even now. Ralph Fiennes impressed not once but twice, with his staunchly self-satisfied Solness in “The Master Builder” at the Old Vic followed shortly after by a Richard III at the Almeida Theater in north London fairly dripping with coercion and contempt, much of it turned against his own damaged self.

Still at the Almeida, Paul Rhys spared no emotional expense in an Anglicized “Uncle Vanya” — with the title character in the director Robert Icke’s version of Chekhov’s play here called Johnny — that took an intermission between each of its four acts, presumably so that the audience could catch its breath. And the fast-rising Scottish actor James McArdle, playing the eponymous social gadfly at the frantic center of Chekhov’s early play “Platonov,” exhibited charm to spare as a libidinous schoolmaster who finds himself fending off women at every turn. The director Jonathan Kent’s production was the first and best of a riveting triptych of Chekhov titles, all in versions by David Hare that came to the National during the summer under the collective banner “Young Chekhov.”

On the musical front, the two-time Tony nominee Andy Karl vanquished all thoughts of Bill Murray in his British musical debut in the Tim Minchin-scored “Groundhog Day.” Mr. Karl plays the dyspeptic Pennsylvania weatherman Phil Connors, who learns to accommodate humanity to a degree that one wishes the world at large might take time to heed. Matthew Warchus’s Old Vic production begins previews on Broadway in March.